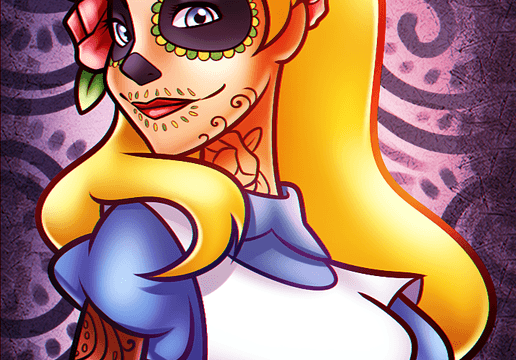 Begin by drawing the shape or guide for the face or head like this. Once you have completed that, draw along the neck guideline. Then sketch the shoulders and the torso guideline.

Fill in the front gaps with a puffy, parted hairstyle, and then draw the headband.

Let’s draw Alice’s face. Begin by drawing the beautifully shaped eyebrows, and then draw the beautiful eyes. Draw the nose, and then draw her lips. Put the roses in crowns over her head. Next, draw the rose to the side of her face. It’s visible because the stem is hidden behind the ear.

Begin to draw the pattern on her face, drawing small flowers around the circle above the eyes, and then add the flowers and the marks on the face.

Draw the neck’s outline and then draw all the way down her straight hair. Remember to take off the collar of the dress underneath.

Then we will draw our shoulder sleeves. They’re a puffy style. After that, draw the front portion of your dress. Alice is almost wearing an apron under the blue gown.

The only thing you need to do is draw her back, then draw the arms. Create a wrinkle on the dress, and then add some hair to her back.

The remaining tattoos can be added after you’ve erased the mistakes and the guides.

Then here’s an illustration of the lines. Color in Alice in the form of a skeleton.