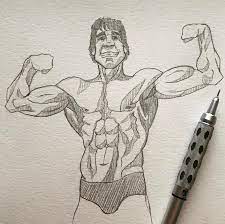 If I had to choose one section of human anatomy that has caused me the most difficulty, it would be the torso. Although artists might argue the back view is more difficult, it’s actually easier due to lack of exposure. Comic artists need to be able to see the front of the body more often in order to create comics.

The torso, just like the hands can bend and contort in many ways which can make learning more difficult. Don’t worry, this tutorial will make learning easy and enjoyable. It is rewarding to reach milestones of understanding for every task that is difficult.

The skeleton is the basis of anatomy as always. There are three major skeletal structures that you should remember for the torso. This is the largest mass in the body. The rib cage, collarbone, and chest bones are the first. The pelvis is next, and then the spine. This connects the pelvis to the chest bones. The spine, which is the most important, is drawn in an S-curve somewhat resembling an X.

Let’s look at the proportions for these simplified forms.

If you divide the lower portion of the original proportion, you’ll notice that it matches the top of your pelvis.

This information should be easy to incorporate into your figures.

For now, let’s do an exercise with these tilted boxes.

Let’s look closer at these simplified forms. The chest box’s centerline protrudes slightly outwardly, indicating that it is not flat. You will also notice that the pelvic cavity is shaped as if it were hollow.

Do as I did and draw several boxes, like torsos, to begin visualizing basic volumes in 3-D space. Then, measure how precise you were with the proportions.

Follow my example to see how I draw mine if you have trouble.

Great! These simplified forms are now in your head. Let’s get on to the muscle groups.

These muscle groups can bend with the spine or twist in different directions. Let’s first review the basic layout.

Let’s start with the major masses. The pectorals are most prominent. They make up a large part of the chest and connect with the shoulders. The abdominals are next, and they make up a large portion of the connection between your rib cage (and the pelvis). Here they are divided into three colors. The six-pack is a brown color. The connection to the pelvis or obliques is shown in green. This part covers the rib cage and connects to it in light blue. Next up are the purple obliques. These are the sides of your torso. The serratus muscles are the last major muscle group in the front view. These muscles are interconnected with the rib cage.

Let’s now look at the two muscle groups seen from the back. The lattes are first in blue. They are located two under the armpit, at the back of your pelvis. The latest is easier to see from the front view of muscular figures, particularly if the arms are raised. The traps, or trapezius muscles, can be seen in pink. They wrap around the neck, connecting to the spine at the back.

These are two examples of an imaginary exercise.

The first box has a large water balloon inside. The water balloon is so large that it almost overflows the box. This overflow is similar to how the obliques connect with the pelvis.

The pelvis is the structure that resists gravity and holds the fruit in place. To show how the pelvis bones relate to the abs and the obliques, I have some fruit in the bowl. This helps you visualize your anatomy.

Here’s a breakdown of each muscle group, their importance, and how you can emphasize them.

The pecs appear to be two large slabs of muscle connecting from the sternum and the shoulder, or deltoid. As you can see, I have drawn the muscle fibers. They stretch from beneath the collarbone and sternum. Remember that tension and connection originate at the shoulder, so your pecs will begin to taper towards the arms.

The abs run from the rib cage down to the pelvis. Two things are important about the abs. Number one, the abs protrude from the center.

Number two, the center of the abdomen is not flat. It must contour with the bumps in the muscle. This form can be simplified by drawing the center line. Take a look at these simplified anatomical drawings and match them with photo references.

The navel, or belly button, is one landmark you can use. The Naval should be at least one head below the pecs.

The sides of the torso are the obliques. To show how the shape changes in space, I have drawn another corner. Obliques connect to the back muscles from the sides of the abs. The pelvic bones are also where muscle tendons sprout. My personal opinion is that the obliques borders with the abs or the serratus muscles can be confusing. This requires extra research.

This small bulge of muscle is located between the obliques and the lats. These muscles join the rib cage to form a bulge that is located in three spots on the side. These tiny bulges are distinctive features of a muscular, super-powered figure. Notice how I have incorporated oval shapes that represent the ribs with the three “legs” of the serratus.

The lat muscles, which resemble a cape-like mass made of muscle, attach to the armpits and extend from the spine. Although only a small portion of the lats can be seen in the front view, it is essential to incorporate them into the torso structure.

Awesome! Let’s now look at the differences between male torsos.

To create figures that are unique and compelling, it is important to get to know the female form. These are the main differences between male and female torsos.

The largest factor will be the size and shape of the chest cavity. The female rib cages tend to be more narrow and slender than those of the male. The female form can come in many shapes and silhouettes, aside from the first.

The breasts are the most noticeable difference. They can alter the shape and silhouette of the torso. They share the same muscle region as the pecs but have additional glands that alter the overall volume and shape. This is why the female anatomy should be studied along with the general torso anatomy.

The female’s larger hips make a significant difference to the silhouette. When viewed from the front, the pelvis is combined with more fatty pads to give an hourglass shape.

The circumference of your torso is the narrowest. On the male model, the naval will align exactly with the waistline. The female figure has a higher waistline and a slightly lower navel.

Let’s now take a look at the anatomy, structure, and muscle groups.

1. Start drawing any figure by starting with a straight line. The torso will mirror the curve of the spine in the case of the torso.

2.  Another line can be added for the spine to run parallel with the line of motion. I have also drawn circles around the areas where bones can be seen on the skin. Last, note that the measurement from the collarbone to your pelvis should be taken at the bottom end of the rib cage.

4. Lightly erase the second stage of your underdrawing. Draw the top portion of the underdrawing and concentrate on where the muscles join. As you draw, keep your lines straight and use the underdrawing as a guide. Remember that the center line on the torso is slightly twisting which can distort the abs or obliques.

5 I will shade the torso in two different ways. The first version is done using more ambient lighting from the top.

The second version uses a more harsh light source and is in the same direction.

6. I love the harsher light. Let’s do some rendering. You can use hatching to create gradients for the bumps or tendons of your muscles. Notice how the light will appear very dark on one side of the rib cage. The contour I have drawn around the torso makes it look more complete and graphic.

Let’s have a quick chat about how to draw the torso in comic books. Comics are often very diverse. Drawing superheroes with complex musculature can be a rewarding experience. Knowing the anatomy will help you create the best art. You may draw a drama based on characters. These dramas may feature ordinary characters, so they will have more natural proportions. It doesn’t matter what, you should be comfortable drawing the torso. Remember that proportions matter. Even if you don’t know exactly where each muscle is located, if you have a good understanding of the proportions, even simplified figures can look exact.

This tutorial was challenging. I know it was. I’m grateful that you took the time to help me. This tutorial will help you learn anatomy and draw realistic figures for your stories. To help you remember the layouts, there are many muscles in the first section of your torso. Bravo for tackling this difficult area of anatomy. Keep pushing the limits of your artistic abilities.

Star Circuit Comic is the place to go to see the preview and to sign up to receive notifications about its release.

We appreciate your time and wish you continued drawing success.

This tutorial has covered a lot. As you all know, human anatomy is a complex subject.

It covers the major muscle groups and how they connect, stretch or compress.

How To Draw The Torso: Back View