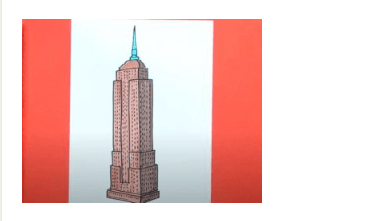 First, understand perspective before you can start to work on a building like the Empire State Building. Let’s begin at the beginning. If you are familiar with how perspective works to draw buildings, skip to step 10. Let’s begin by using one-point perspective to create forms. Use a ruler (or a harder pencil) to lightly draw the horizon (blue lines) and vanishing points (red Xs).

Next, draw some floating squares at various points on the page.

From the vanishing line to the corners of each square (red lines), draw lines. Draw the back line of your cube (the red line) and close your shapes. However, make sure you stay within the red lines that lead to the vanishing points.

You can now erase any guides that point back to the vanishing points and darken the lines. Now you have a cube that is point-perspective.

Let’s now move on to the two-point perspective. Place two different vanishing points at opposite ends of the horizon after you have drawn the horizon. Instead of drawing a square, draw several vertical lines that glide across the page. These lines will be the front edge for our cube.

Draw paths from the top and bottom lines (cube edges) to the vanishing points. You can delete them later if your lines cross each other.

Close the edges of each cube the same as in step 3. We are not finished yet.

Here is where things get tricky. We must draw a third face to complete the shapes. To draw the bottom face for any cube that is floating above the horizon we will use lines drawn from the sides of the cube’s vertices. These lines will lead to the cube’s vanishing point. face. Similar to drawing the top face for any cube that is floating below the horizontal horizon, lines will be drawn starting at the top vertices and ending at the vanishing point. Any shape that has a previous edge running through it will not need a third, since it is hidden from view.

If you wish, erase any lines or darken your cubes. You now know how to use the 2-point perspective. These are the main methods for drawing buildings.

Next, make a cube larger than it is high. This cube will be the foundation of the building. This is the 4th floor of a skyscraper with 102 stories.

Before we draw any other buildings, it is important to first determine the center point of the building as well as the center of each facade on the lower floors. This will allow us to later draw the entrance in the correct position. Draw an X from the corner of the cube to the corner of the front. This will mark the point at which the center of the base’s front faces is. Draw a vertical line across the intersection. This is the center of your building’s face. Draw X from one corner to the other on the top cube to find the center of the building. Next, draw a line that extends from the intersection. This is the central point of the entire structure.

Let’s return to the base, draw the entrance and the decorative columns that separate the window panes. The columns do not extend to the ground as the lower floors house shops and businesses. Notice how the entrance is slightly arched in relation to its top. This means that you will need to clean it up a bit.

Now we can draw the basic structure. You can now create a tall, rectangular shape using the two-point perspective techniques we have learned in steps 5-8. This is the bulk and most important part of the building. It is topped by 3 smaller cubes, which are stacked one on top of the other. This block will become smaller as we move higher. As you do this, make sure you use the correct vanishing points.

We need to draw a cut in the center of the building’s face. It runs about a third up the largest section of the building, and cuts through the cube at the top.

The final sections of the structure should be added to either side of your building. One block is on the right and one on the farthest.

The building’s distinctive feature is its enormous antenna. As a guide, draw an antenna with its own base using the center guide we made in step 12. Near the base, the antenna is thick and becomes thinner towards the top.

Next, windows can be built. This task is difficult because the Empire State Building stands at 102 stories high. It takes patience. If you don’t want your image to look 100% real, you don’t need to draw each level. To suggest there are many levels, you can draw large numbers of windows. You can also draw multiple windows with dotted lines that suggest the same thing. This step will show you an example of the windows columns. Each section contains 4 glass panes. Each cell is separated with concrete. Begin by drawing multiple vertical lines to separate the glass panes. The glass panels will be slightly larger in the areas near the base.

Now, draw horizontal lines to close the window. Make them square. Pay attention to your vanishing points. This process can be tedious. Depending on the illustration, you may not need to draw every window.

The upper floor has some windows, while the lower floor has one. You can also draw a pattern of crisscrossed windows near the building’s entry, and the American flag over the entrance.

We must now delete all horizontal lines that run through the concrete columns that divide the sections of the windows. You can ink the window if you feel confident before deleting these lines.

The image should be inked with a ruler and a Micron marker. Make sure you ink only the lines that are necessary. Once you are done inking, use a kneaded eraser to erase any pencil marks. That’s all! You now know how to draw Empire State Building!