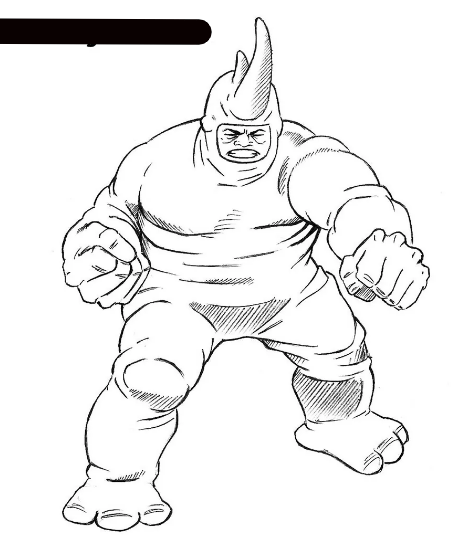 Dear readers welcome to the drawing lesson on how to draw Rhino in Marvel Universe. Reno was first seen in the comic Amazing Spider-Man #41-43. He was a criminal hired by the Eastern bloc country.

Step 1
A skeleton is the first thing we do when drawing a man. The skeleton of a Rhino is wider than that of an average man, as you can see. Start with the head as an oval. Next, draw the spine, thorax, and pelvis. Then, at the end of the first step, we draw the limbs with simple lines.

Step 2
Let’s now add volume to our Rhino. We first draw the lines and horns of the face. A pair of simple lines connect the chest and pelvis. Next, draw arms and legs using standard geometric shapes. You will notice that our Rhino’s body and limbs are wider than a normal man’s.

Step 3
Let’s now add some details. As always, we will start with the head. Draw the horns out and create the opening for your face. Draw the ears on the sides of your head and make rough folds around your neck.

Step 4
Let’s now get to the villain’s face. Draw narrowed eyes on the horizontal line. Draw some wrinkles under the eyes and frown over the eyes. Next, create a wide nose with clenched and elongated teeth.

Step 5
Let’s now move on to the torso. Draw the lines for the torso. Next, remove all unnecessary guidelines. Draw muscles on your torso using several horizontal lines.

Step 6
Now, we must draw arms. Although it seems difficult, it is actually not. Draw the outline of your arms, as shown in the example. Draw lines and folds around the muscles. Draw the fists. (To learn more, visit the lesson How to Draw Hands).

Step 7
Let’s now draw the legs. The same principles are used as in the previous steps. Draw the legs carefully, taking into account all folds (and there are many of them). The feet of our Rhino have large, round toes.

Step 8
Shadows are an important part of comic lessons. This lesson on how you draw Rhino shows us just that. Here we will need to include shadows in the style of the comic, which is contrasting and thick hatching.

Did you enjoy this drawing lesson? If so, you can visit other drawing lessons in the “Comics” section, and don’t forget to share them with others.