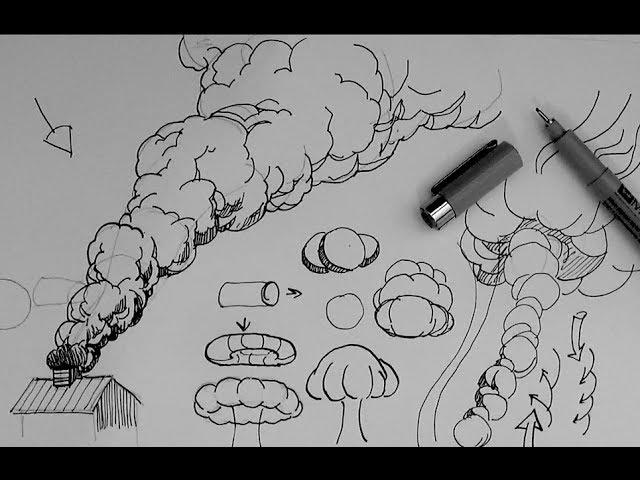 This tutorial will show you how to draw manga, anime, or comic book explosion, smoke, and fire effects. It includes step-by-step examples.

Many anime and manga use effects such as fire, smoke, and explosions. These effects can be used in scenes that range from violent battles to peaceful campfires.

This tutorial will give you some tips and tricks for drawing them.

Keep in mind that there are many ways to create each effect. This tutorial shows a very simple way to draw an effect, but it is easy enough for beginners. However, some artists may prefer more complex and realistic drawings.

You will be following the tutorial with a pencil and paper. Make sure you draw light lines so you can easily erase any mistakes. Once you are satisfied with the placement of everything, you can trace it over with a darker pencil.

To make it easier to see, the lines at all of these steps are made darker.

This type of explosion is basically a smoke cloud with some fire explosions coming out.

Step 1: Draw the outline of the smoke

Start by drawing a simplified outline for the smoke. You can now remove some curves and bumps, and draw the smoke as a single larger shape.

This is especially evident in the example with the large curve at the bottom.

Once you are satisfied with the overall shape, you can break up the more complicated curves into smaller sections. You can simply erase the areas you don’t like and redraw them.

Next, draw fire explosions from the smoke. To make your drawing more natural, make sure they are different in size and length. You can place a few of these so that they overlap the smoke’s outline and then draw the others like they are coming from behind it. This will make fire blasts appear to be going in different directions.

Remove the portions of smoke that have been “cut” by blasts. Next, draw more smoke curves around the base of these blasts. This will make them appear to be actually coming out of smoke.

To make the smoke cloud look more 3D, add some curves and bumps to it.

Once you are done, you can go back and add darker lines to your drawing.

The explosion will be similar to the one above, but instead of exploding from the smoke, it will produce flying debris.

Step 1: Draw the outline of the smoke

As in the previous example, draw the outline of the smoke. Again, you can keep the outline simple and add smaller bumps or curves in the next stage.

You can now break up the curves in the outline of the previous step and make smaller bumps. (Erase as necessary). Next, draw the paths for the flying debris using the example.

These should be a series or a collection of curves. To make them appear more natural, keep their spacing fairly random.

The flying debris will not be visible in this instance. Instead, you’ll see their smoke trails. These should be drawn wider at the base, and then narrower towards their tips. The curves will be based on the paths in the previous step. Each smoke trail should be outlined with a series of bumps and curves, which get smaller towards the tips. To make the trails appear lighter, you can add breaks to the outlines.

First, erase the lines that will guide the smoke trails. Then, erase the outline of the main smoke cloud at the base of some trails. Leave it around the other bases. It will appear that the debris is moving in different directions, with some flying toward the viewer while others fly behind the smoke cloud.

You can add more small smoke patterns (curves or bumps) to the main shape of your smoke. A few inner curves can be added to some smoke trails.

To finish your drawing, trace over it with darker lines.

Step-by-step instructions on how to draw small explosions

These explosions can be used for sparks and other types of impact, such as bullets hitting a wall.

These types of explosions can be drawn in one step.

To make the explosions look natural, try to draw them in a different way from the last one.

You can choose to give these explosions a specific pattern depending on the meaning you wish them to have.

You might want to draw the ricocheting bullets of a machine gun in a more defined line, for example.

These can be drawn in any pattern that you like. Be sure to draw each one in a different way than the others.

Once you have established the layout, you can start to trace your drawing using darker lines.

Step-by-step instructions on how to draw a huge explosion

This is a large explosion. This can be used to demonstrate a super weapon being launched.

The main shape of the explosion can be drawn as a circle. It’s okay to leave the bottom open, as it will touch the ground.

Step 2: Draw the outline of the Blast Wave

Draw the blast wave shape at the bottom or open end of the circle, as shown in the illustration.

Step 3 – Sketch the details of the Blast Wave

The explosion type is easy to draw, so you don’t have to do much more than that. Once you are done, refine the drawing and add darker lines to it.

This is an example of an explosion in the air without smoke.

Start by drawing the outer outline of the explosion and the blasts that will come out. It should look something like the sun.

Each blast should be drawn slightly differently in length and width. A few can be drawn with the ends open so that the lines defining them do not join at the tip.

Next, draw the inner explosion shape similar to the outline but smaller and denser.

You can add multiple blasts that go in different directions depending on the direction of the explosion. This will give the drawing a more 3-dimensional appearance.

Continue adding details until you reach a similar example to the one above.

To finish your drawing, you can use darker lines.

Step-by-step instructions on how to draw a blast explosion

The explosion in this example will not be in the air but rise from the ground, as in the previous one.

These explosions can be used to demonstrate an artillery attack.

This explosion is not as uniformly distributed as the previous one, which went out in all directions. First, draw a simplified version of the above illustration to determine the shape you desire.

The outline of the explosion can be used to create a more detailed drawing, as shown in the above example. You can simply erase any parts and add details.

The explosion’s outer shape will create a smaller, similar shape.

To make the explosion look more three-dimensional, add multiple blasts that go in different directions from the outer and inner shapes.

After you are done, go back over the drawing with darker lines.

Step-by-step instructions on how to draw smoke

This smoke can be drawn from a fireplace or a chimney.

Step 1: Draw the outline of the main shape of the smoke

Start the drawing by delineating the smoke’s overall flow. This can be done quickly using just two lines, as shown above.

Draw the outline of the smoke along each side of your previous step.

You can add more details like curves and bumps to the smoke. To make the smoke look natural, keep them as random as possible in terms of size, shape, and placement.

Continue adding details until you reach a similar result to the one in the previous example. It’s important not to add too many details, as this can make your drawing look messy. However, you also don’t want too few details because the smoke will appear flat. Find a balance.

To finish your drawing, trace over it with darker lines.

Step-by-step instructions on how to draw fire

This can be used to show a campfire or random objects like debris.

Step 1: Draw the Base of The Fire

Draw the objects you want to burn. It will be pieces of wood boards in this instance.

First, add the flames to the foreground. This will make the fire more visible to the eye.

Each flame should be drawn with its bottom “hugging” whatever object it is coming from. The overall shape of the flames should be wider towards the bottom, and narrower towards the top.

Give each shape a wave and try to draw flames waving in a different direction. You can also draw some of the flames splitting towards the top into several pointed tips.

Because flames are transparent, they do not erase any parts of the objects that have been burned. These will be defined with lighter lines.

As shown in the above example, you can also add sparks to the fire.

After you are done, trace your drawing using darker lines. Do not cover the areas that have been burned by the flames. You want to make the flames semi-transparent, so keep the objects that they cover visible.

Many effects, such as smoke, fire, and explosions can make a scene more vivid. These effects can be as simple or complex as the artist wants. Although the examples in this tutorial don’t seem to be too complicated, some have quite a few details. Don’t be surprised if it takes some time to draw them.

You can also find similar products at: