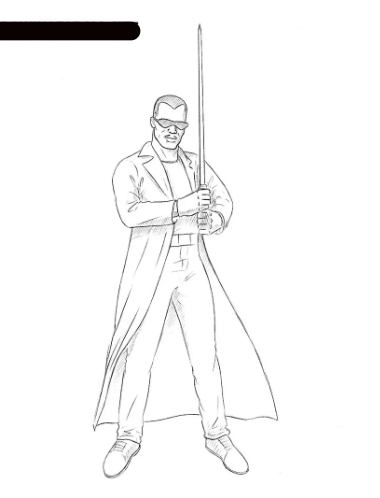 Hello comics enthusiasts and we welcome you to our drawing tutorial on drawing Blade. The blade is one of the characters that appear in the comics published by Marvel Comics. It was developed by Marv Wolfman and Gene Colan and first appeared in the tenth issue of The Tomb of Dracula comic. The Tomb of Dracula 1973.

Step1
We must ensure that our Blade drawing is proportional and symmetrical. To do this, we have to draw the “Stickman”, the skeleton of the character. With the aid of an oval, sketch out the head. Then, using a simple line, draw the neck and the spine. Along the spine’s line draw out the thorax as well as the pelvis. Then sketch out the legs and arms by drawing simple lines.

Step 2
Draw two lines that intersect in the middle of the facial area. Then, draw outlines of the neck and the torso, that narrows towards the waist. The next step is to use simple geometric figures, and sketch out the legs and arms. Knees, elbows, and shoulders will be sketched in the shape of circles. Then, sketch out the legs and arms as cylindrical shapes. Draw feet and hands and feet in the same way as in our illustration.

Step 3
We’ll now get into the particulars. The first part we sketch includes our eyes (in this instance, glasses) Then, we sketch the mouth and nose. By using simple lines and pencils, we sketch the ears and hair. With long lines, sketch out the outline of an extended jacket. Draw the pants and a sword that is in the hands.

Step 4
In this first step, we will be using black and white lines. Like always, we begin with the head, then move to the lower part. Take care to draw the glasses and draw the lips and nose. Next, draw the outline of the hair and head. Don’t forget to draw folds of the face as well as a thin mustache.

Step 5
An easy step in the course is you can create a Blade of Marvel. We will have to be careful when drawing out the neck and remove any unnecessary lines around the neck. Then, draw the lines of the collar wide like in our illustration.

Step 6
Then let’s get towards Blade’s hand. With clear and dark lines, carefully trace the outline of the sleeves, including folds around the elbows and armpits. Then, draw out the hands with fists clenched. In the final stage, we draw the lengthy sword that is pressed into our hands.

Step 7
A simple part of the instruction on Blade. With clear and long lines, draw the lower section of your coat. The long horizontal folds on the coat, then eliminate all the instructions from it.

Step 8
The sketch of Blade is nearly complete. This is where we draw the lower part of Blade’s body. Make sure to draw the belt and pants. Draw the folds on the pants, as shown in our illustration. Draw the shoes and then take out all of the other instructions from the design.

Step 9
We can now work on shadows. By using painting hatching glasses and hair. After that, we apply hatching shadows in areas where light doesn’t fall. This makes our drawing more realistic and voluminous.

Today we have shown our readers ways to draw Blade in Marvel. In this article, we’ll give you some useful suggestions. Remember that you can sketch your drawing with lines or ink. Keep in mind that, with the reflection of your drawings in the mirror you will see all of the distortions in the proportions.