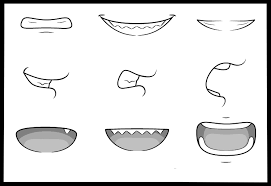 This tutorial will show you how to draw manga and anime teeth. It also includes side- and front-view examples. This tutorial also explains how to position them in your mouth and outlines their various styles.

Anime teeth are usually drawn without showing all details. They are usually shown together or with hints of individual teeth.

Rarely are all teeth shown, but they are drawn almost exactly the same as real teeth. This tutorial will not address that as you can easily see a photo of the real tooth if you need it.

It’s good to know how the teeth will look in your mouth before you start drawing them. This rough estimate can be seen in the “see-through” drawing.

As you read the tutorial, it will become clearer how important it is to understand where the teeth are located in the head.

Although you don’t have to draw a clear drawing every time, it is a good idea to remember these points to avoid making mistakes.

Front View of Teeth in an Open Mouth

This is the front view from the previous examples. This view makes it more difficult to draw teeth. This is particularly true for the bottom row, where it’s difficult to determine how high the teeth should be along the bottom jaw.

As suggested in other tutorials on 3dvkarts, a good trick is to use a simpler view to calculate the position of the same part in a more complicated view.

You can then use a side-view drawing of the teeth to project a set line that will show you where the teeth are in the front view.

Although this might seem like a lot of work, you don’t have to create a side view drawing as detailed as the one shown. Just do a quick outline sketch.

Here are some common mistakes in drawing anime

As shown in the following examples, showing teeth can help to emphasize certain emotions.

A simple smile is probably the most obvious expression of teeth.

You can give a hint of the top and lower rows of teeth in anime/manga by drawing a few curved lines along each side.

A scared face is another expression that can be used to show teeth.

Similar to the smile, you can again show just a hint that separates the top and bottom rows.

Another common expression in anime is the side view grin, where teeth are visible.

To emphasize its aggressive nature, this expression is often drawn with a hint of “fang”.

The expression of the anger side view is very similar to that in the previous example.

Similar to the grin teeth of the angry mouth, sharp teeth are often drawn with a “fang-like” tooth.

You can see again that even though your facial expressions or mouth shape may change, the position of the teeth remains the same. It doesn’t matter if you align them perfectly when drawing the same character from different perspectives, but it is a good idea generally to keep the teeth roughly in the same position relative to the rest.

Sometimes, anime characters have unusual teeth. This helps to emphasize a person’s personality and gives them an individual look. Below are a few examples.

One Tooth Not Sticking Out – Yaeba Animation Teeth

This is often drawn to indicate a mischievous and energetic character. Sometimes, this is called “Yamba”.

This trait can be displayed by drawing your mouth open, but only one sharp tooth (like an afghan) should be drawn to one side.

It is possible for characters to show one tooth showing even though they have a closed mouth. This can be quite odd and rare.

Please note that this style of drawing teeth is very stylized. However, it’s important to be accurate.

A manga or anime character with sharp teeth resembling a shark can indicate a competitive personality. These may be permanent features for some characters, while others may only have them in certain expressions.

These types of teeth can be drawn almost exactly like shark teeth or a saw.

Another variant of shark teeth may be seen when a character smiles.

These types of teeth can be drawn again like a saw, but instead of drawing them straight along the mouth, draw them curving.

Manga and anime teeth are highly stylized and simplified. However, this does not always make it easy to draw. Drawing teeth can be difficult due to the variety of angles, facial expressions, and characters. This tutorial should have given you some insight into drawing teeth.

You can also see similar products: