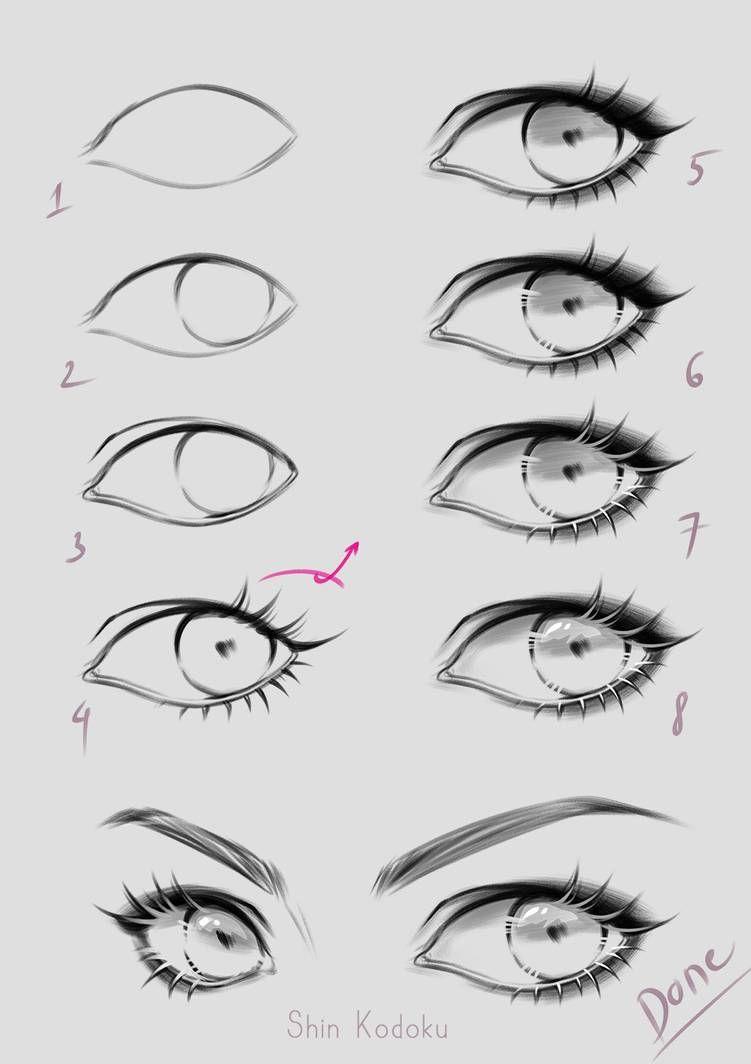 This tutorial demonstrates how to draw various types of manga and anime eyelashes, from very simple styles to more complex ones.

The most important aspect of anime is the eyes. This tutorial will show you how to draw anime eyelashes.

These are the most basic type of anime eyelashes. They have a single shape and no individual lashes. These usually consist of the top and the bottom, but in some simplified styles, only the top eyelashes can be seen.

It is easy to draw these eyelashes. Draw the outline of the eyelashes.

The top eyelashes should be thicker than those at the bottom. You should not make the bottom eyelashes too thick. This could cause your character to look like they have bags or a black eye.

Once you are done with the line drawing, fill in the eyelashes with black.

Below you can see how these eyelashes look with the eye fully drawn.

Here are some tutorials for drawing the eyes.

These are the most common eyelashes, with a variation of them being seen in manga and anime where only a few individual lashes are displayed.

Similar to the previous example, draw the outline of your eyelashes and leave out individual lashes.

Fill in the area around the eyes with black.

When drawing eyelashes, remember that they tend to follow the contour of the eyes. You don’t have to show all of the transition, but it is important that you keep the eyelashes shown in the correct direction for the area.

Because the eyelashes are so tiny and simple, you can draw and shade them simultaneously. You can add larger eyelashes to your outer corners and lower eyelids.

You can again see how the eyelids can look with these types of eyelashes, once they are fully drawn.

Because they take longer to draw, semi-realistic eyelashes in anime are rare. These eyelashes are more common in manga and individual art covers.

Similar to the previous examples, draw the outer shape of your eyelashes. Draw the top and bottom portions as one shape.

Again, fill in the eyelash outlines with black.

This example has thick eyelashes so it may be necessary to use several strokes. You should draw them thicker at the base and shorter at the ends.

These semi-realistic eyelashes are not symmetrical, so they’re different for each eye. You can avoid creating a doll-like look by drawing them at slightly different times.

To keep your eyelashes natural, make sure you draw them curled. It is a common error to draw eyelashes in straight lines.

How to Draw Anime Wolf Girl Step by Step

You can see above the full-drawn eyes with more realistic-looking lashes.

These should be drawn by first tracing their inner shapes. These eyelashes will look strange if you draw too many lines.

You can then either draw out the outer shape, erasing parts where you wish to add individual lashes, or you can draw them in immediately.

When drawing the entire shape, make sure the outer curve is still on the same track as the individual lashes.

The blue lines above show that the inner and outer lines are still the same as before.

Here are some tips for good drawing techniques:

After you are done drawing, fill in your eyelashes with light colors or shading to ensure that the lines remain visible.

People with lighter eyelashes tend to have a lighter overall eye/hair color. This is an example of how it can look.

A well-designed eyelash can make all the difference in creating an anime-looking character. They can be drawn in a variety of styles, depending on their complexity. You can find more tutorials on drawing anime eyes at: