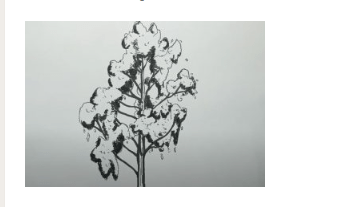 The easy step-by-step drawing instructions are below.

For the beginning sketch the tree’s roots. In a tiny group close to each other make a few tiny Oblique lines wavy and joined to the highest point.

Then, trace the trunk. From the far left source then trace a straight line upwards. Draw a second line up from the beginning far to the right, but make this line longer.

Then trace the branch of your tree. Then, on the side that is right of your tree toward the highest point, trace a tiny straight line that is coming out. Draw a long line that slants upwards, away from the previous line. At the midpoint of the lines, trace a tiny line that curves upwards. On the left-hand side of your trunk draw an oblique line that is small and goes out and draw an additional oblique line, a little distance away from the line. Then, on the right-hand side of your trunk, draw a tiny curved line to the outside. Draw a second curve that is in the reverse direction of the previous branch that you sketched on the left. Between your two curves create the letter “V”.

Draw branches using the branches. Create tiny “V’s” at the end of your branches. On the left-hand part of your tree, draw a curved line outward, leaving an opening at the center. To high point of the blank draw a tiny curved line that extends outward along the exact same lines as the final curve.

Lastly, you can sketch the leaves. The place you left the empty space in an area of the branch, make a tiny circle. Instead of using the line, use small bumps to make your circle. Draw various types of small and large forms using small humps emerging from at the end of your twigs as well as branches.