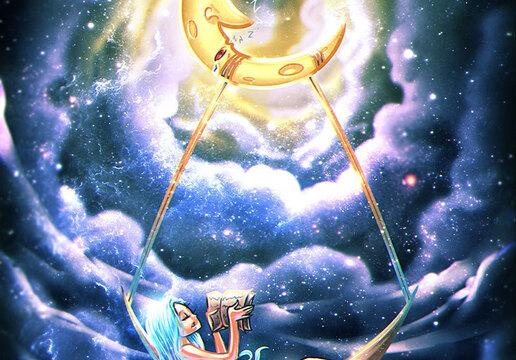 How to draw a sleeping moon

Okay, this tutorial will have many steps. Let’s begin with the basics. Make sure you draw them lightly so that they don’t interfere with your permanent lines.

Let’s draw the moon first. Next, draw the face shape and the body that surrounds it.

Use thinner line weights to sketch the moon’s face and the craters within it.

Let’s now draw the rope that is tied to the Moon, and which will then attach to the hammock.

Next, draw the shape for the hammock. Leave a few spaces open for your body to be drawn into.

Draw the face of the girl.

Next, draw her hair so that it frames her face and overlaps the hammock.

Next, draw her arms so that she holds a book.

Then, take the book and fill it in between your hands.

Next, place her body in the hammock and draw it.

Finally, draw the Z’s that extend from the mouth of the moon.

After you are happy with how you have drawn the steps, you can erase the initial guidelines. You should be able to see the final result. This concept was so much fun to draw!

How to Draw a Rattlesnake