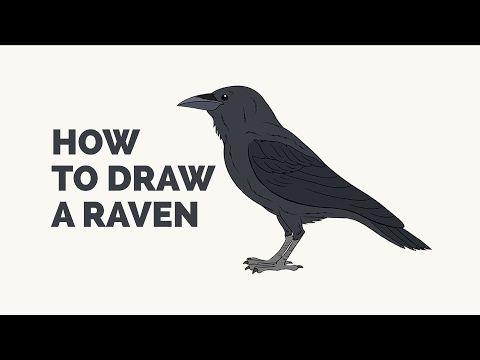 This drawing tutorial will teach you how to draw the raven, one of the most iconic birds. It has a very interesting appearance. This bird is a symbol of ritual importance in certain religions. The raven, for example, was considered the Devil’s bird by the Slavs. In ancient Scandinavia, it was also the guide of Wotan-Odin, the main German god.

Many people associate the crow with a symbol of evil and prejudice. But we can learn how to see positive sides in this bird. This tutorial will show you how to draw ravens to make a positive image.

How to draw a Raven

Draw an oval-shaped shape and place it at an angle. You can mark the head slightly higher by drawing a small circle.

Step 2: Draw the Neck and Tail

To form the tail, draw a triangular shape left of the largest oval. Next, join the head and body by drawing two jagged lines. The distance between them will determine whether the neck of the crow is thicker or thinner.

Visually, the beak of a raven can be divided into two halves. Draw the beak of the raven and divide it along a longitudinal line. This will reveal the mouth of a crow.

Draw a small circle in the middle of the head. Next, draw a line running from the top to the eye to the beak and finish the line at the base.

Step 5: Draw the Wing of a Raven

You can only see one wing from our viewpoint – it covers most of the body. Next, you will need to trim the tail of the wing around the tip.

Step 6 – Draw Legs for the Raven

Give the raven strong legs. Draw the thighs that are longer. Mark the spot where the knees should bend. Draw the lower half of your legs.

Step 7 – Draw your Toes the Raven

Step 8 – Draw the plumage of the Raven

Cover the entire tail and wing area from the top. Give them the shape of feathers.

Check that the feathers are neatly placed and don’t extend beyond the body’s lines. Once everything is in order, you can move on to the final stage.

The color of the crow should be solid. To create a dark color, mix gray and black. Add volume to the palette with shadows and then make the paws and beak black.

Done! This lesson teaches you how to draw ravens. You also learn how to follow a step-by-step plan. Your drawing gallery is now complete with another amazing artwork. Let us know which part of this lesson was less clear. We will be better with your feedback.  How to Draw a Vampire