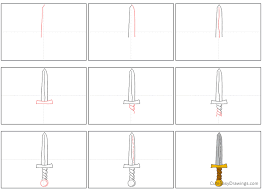 This tutorial will show you how to draw a Katana. It includes illustrated examples and a breakdown of each part of the sword.

The katana is one of the most popular weapons in manga and anime. Although it is easy to draw, it can be difficult to understand its various parts.

This tutorial shows you how to see the katana from the side. This view allows you to easily see all parts of the sword, and it is easy to draw.

Step 1: Draw the outline of the Katana

Draw the combined shape for the handle and blade of the katana. This is basically the outline of its silhouette.

This shape’s blade should be slightly curved with the tip pointed in the direction of the curve.

Divide the handle to form the blade and draw the handguard. It protects your hands from falling onto the blade, as the name suggests.

A katana’s hand guard is usually very thin and not very broad. After you’re done, draw the hand guard as required and then erase any sword that is not in line with it.

The sheath’s blade collar locks the sword in place. It will be approximately the same width as your blade. You can draw a simple line to show its length.

The pommel, which is located at the end of the hilt, is basically a cap. The handle portion of katanas has an end cap that is approximately the same size as their handle. It can be defined by drawing a line the same length as the blade collar.

We will use a large edge that is found in certain types of katanas for this example. Trace the curve of your blade to draw the curve of this edge.

The hilt of katanas is usually covered in a braid-like wrap. This pattern can be drawn by adding a series of evenly spaced rhombus forms along its edges.

If you’re only going to do a small drawing, you can skip the detail of the handle wrap. This is a common practice for manga artists and animators.

You can go on to the next step if you need to draw the hilt more precisely.

The hand wrap braid will create some folds.

Drawing lines from the tips (as shown in the above example) can help you show the folds.

Finish the hand wrap by drawing some split lines at the bottom and top edges of the rhombuses.

These lines will complete the wrap effect as seen in the above example.

This will allow you to draw a katana.

The most common weapon in manga and anime is the katana. While this tutorial covers the basics of drawing one, there are many more options. For example, you can draw swords from different angles. You can also make katanas from other materials than the one shown in this tutorial. These swords are generally made up of the same parts like the ones shown in the examples. You can follow a similar step-by-step method to draw them.

How to Draw an Anime Hand Holding Something