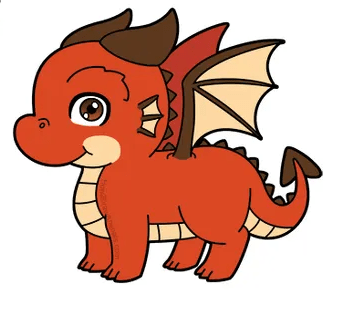 Draw a curved line similar to a half-circle for this little cartoon dragon’s eye. Sketch lightly at first so that it’s easy to erase if you make a mistake. When you get the shape right, darken the line and make it thick for eyelashes. The shape should be like a circle that doesn’t connect at the bottom.

Inside the eye, draw a small circle for the iris. Sketch lightly at first to get the shape right. Inside the iris, at the top and bottom, draw two tiny circles for highlight. In the middle of the iris, draw a smaller circle and shade it in for the dragon’s pupil. Don’t overlap the highlights.

Draw a curved line above the dragon’s eye for a thick brow. Make the line jagged along the way to give the brow a rough, bony look.

On the lower, left side of the eye, lightly sketch a big C-shaped line for the dragon’s muzzle. The bottom part should curve and end under the eye. When you get the shape right, darken the lines. The bigger this line is, the bigger the muzzle will be. At the end, draw a smaller line for a smile line.

On the top, right side of the head, draw a wide, curved line for the base of the first horn. For the top of the dragon’s horn, draw a curved, angled line. The whole shape should be similar to a wonky triangle.

Near the top of the muzzle, draw a tiny circle with a curved line over it for the nostril. To the right of the eye, add the ear by first drawing three, thin, long, spike-like shapes. The top and bottom spikes should slope toward the dragon’s eye. Add curved lines between the spikes to finish the shape.

Below the head, draw two lines that curve down and to the right for the chest. The longer you make these lines, the taller your cartoon dragon’s body will be.

To the right of the chest, draw two curved, vertical lines for the front leg. Don’t make the leg too long. Make the bottom part of the shape flat for the foot. The dragon’s leg should be wide. On the left side of the foot, draw three tiny, angled lines for the toes.

To the right of the leg, draw two short, horizontal lines for the underside of the cartoon dragon’s body.

To the right of the head, draw a long line that curves up and then angles to the right for the dragon’s wing. Add a parallel line to the right to make the shape thick. Give it a pointy tip at the top.

Where the dragon’s wing bends, draw a big V-shaped line for the middle of the wing. Make the shape thick and the tips pointy. Then draw curved lines at the ends for the skin on the wings.

Draw a horizontal line to the left of the head for the top of the body. Don’t overlap the wing. To the right, draw a big U-shaped line for the top part of the dragon’s tail. At the bottom, draw another U-shaped line to make the shape thick and the tip pointy.

At the top, draw an angled line for the other wing peeking out from behind. Draw a series of lines along the bottom of the body for bigger scales. For the dragon’s tail, draw the top portion first, and then add a couple of lines inside.

Using a pen or marker, carefully go over the lines to make your cartoon dragon drawing permanent. After the ink dries, get rid of every pencil mark with an eraser.

Color your cartoon dragon drawing! Use brown for the horns, spikes and wing edges. Use red-orange for the body but leave the lower jaw and the inside of the eye blank. You can color your dragon any other color you’d like instead, like blue, purple or green! Color the rest of the body peach. If you don’t have peach, use yellow or light orange. Use light and dark brown for the eye. Don’t forget to pause the video to draw at your own pace.