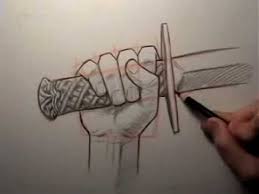 This step-by-step tutorial will show you how to draw manga, anime, or comic-book-style hands that hold different objects. Examples include hands holding the sword, knife or shopping bag, gun, cell phone, pencil, or pen. The examples can be used to draw real hands.

Drawing hands by themselves isn’t easy. Drawing hands while holding objects is even more difficult as certain hands can be completely covered by the object making it more difficult to determine the proper position and proportions of the different hand parts.

This tutorial will show you some examples of drawing objects you will likely find in manga, anime, or comic books.

How to Draw Anime or Manga Hand Holding a Knife

Begin by drawing the proportions overall of the main parts in the hand. If your fingers are positioned together, they can be drawn in one large shape, before drawing each finger separately.

Draw the outline of the thumb, and then draw your thumb. The different shapes could overlap, however, you can erase the lines that overlap while you draw to ensure that your sketch doesn’t become too messy.

The final proportions sketch you draw will look like your hand that is wearing a glove.

Once you’ve got the basic shape of your hand (this could be a rough sketch) sketch the actual item that your hand will hold (in this instance, the knife).

Make sure you clean up the drawing and erase any lines.

Sketch in the specifics of the knife and hand. It is also possible to draw over the drawing with more detailed lines that are cleaner and darker.

You could also use the same perspective of the hand as well as the same techniques when drawing it with other types of objects. You can also change the object’s direction to face upwards instead of downwards. For instance, you could sketch a club or sword. It is also possible to rotate your hand and draw it onto something similar to handrails.

How to Draw Anime or Manga Hand Holding a Sword

Begin with the most important hand shapes.

Since in this instance there will be an index finger that is slightly displaced towards the rest of the fingers, we draw it as a separate. It is possible to begin drawing the other fingers in one shape (same as the first illustration).

Once you have the main proportions, draw the sword. Draw the fingers individually following that.

As in the previous illustration, you could also make use of this particular view and the location in the hands to demonstrate the hand holding objects or holding onto objects in a more relaxed fashion.

To learn how to draw a katana, refer to:

How to Draw a Katana Step by Step

For different types of weapons, check out:

How to Draw Anime or Manga Hand Holding a Shopping Bag

Begin by drawing the most important designs in the palm. Draw the palm as well as the thumb’s base.

Draw the overall form of your fingers. Then draw the thumb’s base, followed by the thumb itself.

Draw the bag once you’ve drawn a rough sketch of your hand and draw each finger individually afterward.

Remove the guidelines and finish your drawing with specifics.

How to Draw Anime or Manga Hand Holding a Phone

While later on, most of the hands will cover by the phone, it is important to sketch the basic designs of the hand as in the previous examples in order to avoid mistakes later.

Draw a rough outline to mark the outline of your fingers (you could also opt to skip this step for this particular image and draw each finger in turn). Then trace the thumb.

The phone is drawn with a light touch so that you are able to feel the hand.

Clean your drawing. To aid in the tutorial, the phone is kept as “see-through” in this step, but you are able to proceed to erase the parts that are hidden from the hand.

It is possible to erase the visible hand part If you didn’t do this in the previous step. Then, draw the specifics.

How to Draw Anime or Manga Hand Holding a Gun

Draw the most prominent designs on your hand.

Make sure to draw the gun once you have the largest proportions of your hand.

Make sure you draw in the specifics.

Find the proportions overall of the hand. It may be harder drawing the palm portion of the hand when looking this way.

Draw your thumb and index finger, and then draw with a pencil or pen.

Because the fingers of the other hand are not visible from this angle, it is hard to trace them out in the right size and position. So it’s best to sketch out every finger from the base up to the tip using light lines (you can erase the invisible portions in the future).

In the interest of the instruction, certain parts that make up the hands are drawn in a way that is transparent, making it easier to distinguish the other hand parts. It’s not necessary to be concerned about this when drawing.

Make sure you draw the ring finger.

Draw the smaller parts of your hand.

As we have mentioned, you can draw the hands using the illustrations in this guide to sketching hands that hold other objects. You can draw hands from different angles with the same techniques beginning with a rough sketch drawing the most important portions of your hand at first, and moving on to the smaller details. If you’re having difficulty drawing the areas which aren’t visible make sure to draw the hand with “see-through” to help you position them properly.

Always ensure that you examine the different proportions of your hand with each other to avoid making mistakes. Hands can be difficult to draw so don’t let yourself get discouraged when your drawings don’t look correctly at first. Keep practicing.

For more information about drawing hands, check out: